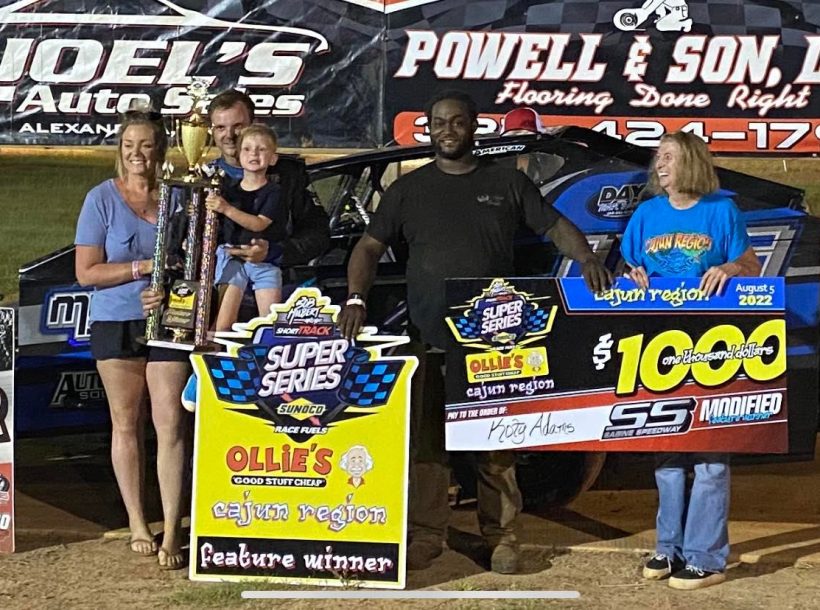 MANY, LA – A hard-fought victory.

Adams, of Doyline, La., narrowly fought off Tommy Rascoe as his car erupted in smoke and lost power on the race’s final lap.

Adams, utilizing the extreme outside lane of the Sabine bullring, led from the drop of the green flag before swapping the lead with Rascoe during the race’s second half.

Rascoe briefly slipped by Adams on the 16th lap. Rascoe’s time out front, however, was short-lived.

Adams regained control on the 20th circuit – and despite plumes of smoke and leaking fluid on the final circuit – thwarted Rascoe’s last-lap bid to earn the $1,000 victory, his second of the season in Round No. 8 of the Day Motor Sports point series.

“The engine blew coming to the white flag. It started smoking and losing power. I just figured it wouldn’t really help to shut it down. Had that race gone another half-lap, I wouldn’t be standing here.”

“My hat’s off to Tommy Rascoe,” Adams said. “He drove a clean, hard race.”

Rascoe, of Converse, La., settled for second ahead of Cody Robbins of Mansfield, La., Alan Myers of Sibley, La., and Caleb Dillard of Robeline, La., who started last in a borrowed ride after fuel pump issues with his primary No. 18.

The visit to Sabine was the first of two Ollie’s ‘Cajun Region’ events over the weekend. The series headed to Super Bee Speedway in Chatham, La., on Saturday.