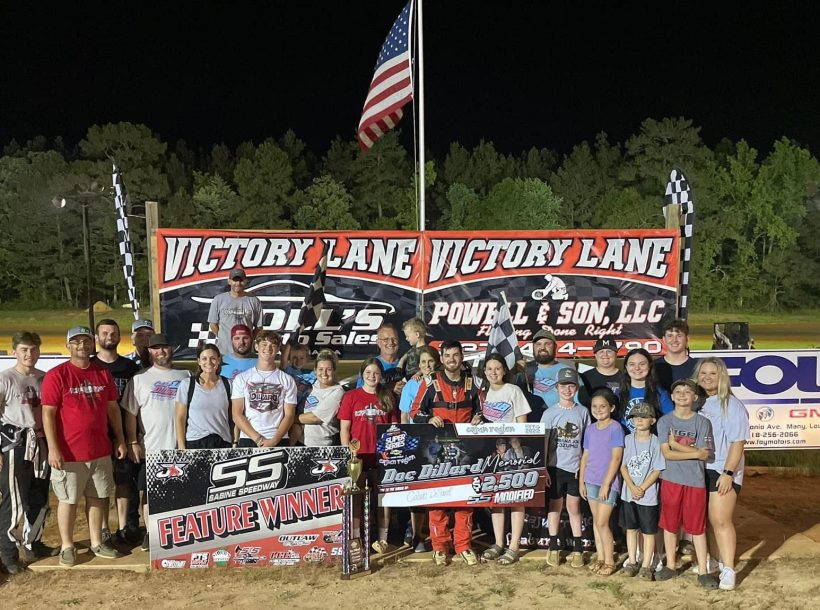 MANY, LA – Caleb Dillard won one for his grandfather on Friday night.

Dillard topped the ‘Doc Dillard Memorial’ at Sabine Speedway for the Bob Hilbert Sportswear Short Track Super Series (STSS) Fueled By Sunoco Ollie’s Bargain Outlet ‘Cajun Region’ – an emotional triumph at the Many, La., oval during Round No. 3 of the Day Motor Sports point series.

The victory was worth $2,500-plus for the Robeline, La., driver, who was the inaugural STSS Cajun Region champion a year ago.

The Sabine grandstands were jam-packed for the event.

Dillard’s drive to victory nearly ended on the first of 40 laps when his No. 18 collided with an infield marker tire in turn four. He was able to continue and made the most of the good fortune.

Dillard chased down early leader Cody Robbins, made the winning pass and drove on to victory in an historic night for the series.

Not only was the event the longest and most lucrative event run thus far, it also marked the debut of Ollie’s Bargain Outlet as the region’s title sponsor, an announcement made yesterday.

Alan Myers of Sibley, La., chased Dillard across the line in second, followed by Keith Badiali of Benton, La., Koty Adams of Doyline, La., and Tommy Rascoe of Converse, La.

The Short Track Super Series Cajun Region Day Motor Sports point series moves to Super Bee Speedway in Chatham, La., on May 28 for Round No. 4.