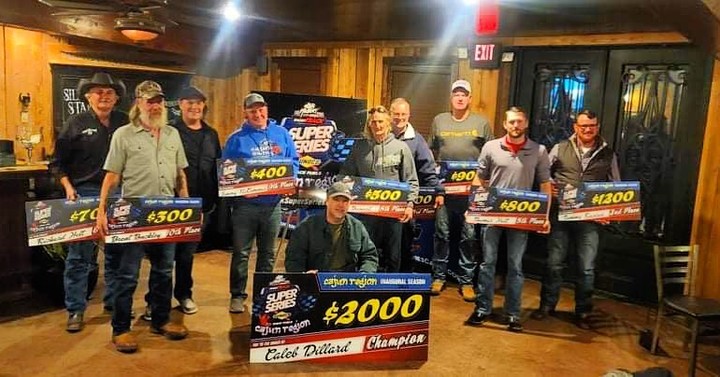 Susannah Bates served as the master of ceremonies as the top-10 drivers in the final 2021 STSS ‘Cajun Region’ standings were honored in addition to the distribution of special awards.

STSS founder Brett Deyo addressed the crowd, reviewing a competitive first season that included six winners in 10 events and looked ahead to a robust ’22 schedule with 14 events at 10 facilities in three states (Louisiana, Texas and Arkansas).

The Day Motor Sports (Tyler, Texas) point series rewarded competitors with $8,400 in point fund money, $2,000 of which went to the series champion.

Robeline, La.’s Caleb Dillard was lauded as the first ever ‘Cajun Region’ champion, with five victories during the 10-race season.

Dillard, driving the TCB Motorsports No. 18, amassed a total of 924 points, 84 markers clear of the rest of the ‘Cajun Region’ field. Dillard unfortunately was ill and unable to attend the awards ceremony. His car owners and father received the awards on his behalf.

Tommy Rascoe finished the inaugural as the runner-up in the ’21 standings with one win and 840 points. The Converse, La., resident received $1,200 in points fund cash.

Thomas Holt rounded out the top five in the inaugural season, receiving $800 for his fifth-place efforts with 622 points.

Each of the top-10 drivers received apparel courtesy of series sponsor Day Motor Sports, represented at the awards ceremony by Joe Henry.

Special appreciation plaques on behalf of the series went to Day Motor Sports and Shed Road Auto Parts for their support during the season.

‘Cajun Region’ directors Tim and Chris Bates were surprised with Appreciation Awards. Not only did they serve as series directors, but Tim Bates Painting was also a points fund contributor.

The ’22 STSS ‘Cajun Region; season gets underway on Saturday, March 26 at Superbowl Speedway in Greenville, Texas. The up-to-date agenda is posted on the web at: https://shorttracksuperseriescajun.com/?page_id=30.

Membership forms for ’22 have also been posted: https://shorttracksuperseriescajun.com/wp-content/uploads/2022/01/2022STSSMembershipCajunRegion.pdf