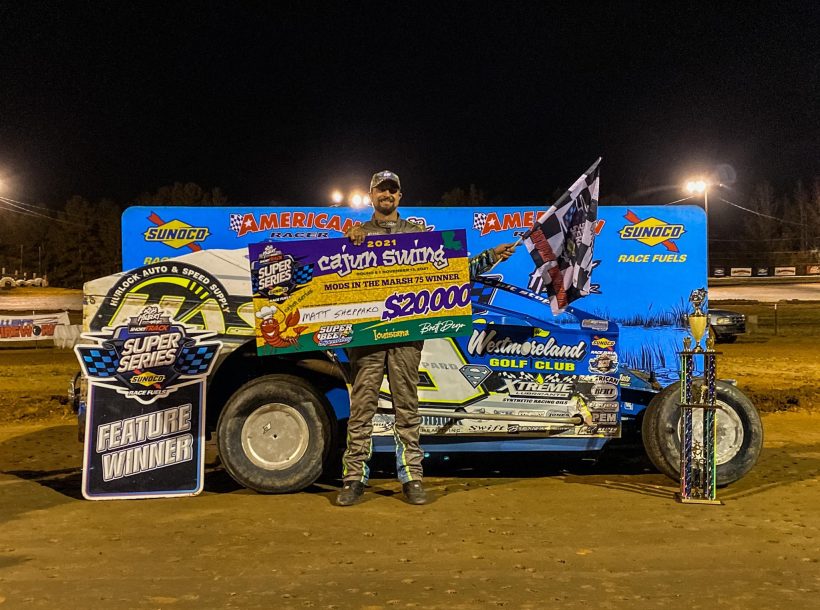 Sheppard topped the ‘Mods in the Marsh 75’ claiming the $20,000-plus payday, the third largest winner’s share distributed by the STSS all season.

“This was the pot of gold at the end of the rainbow. To get this win, it’s gonna make the ride back up to New York a heck of a lot easier,” said an elated Sheppard of his second consecutive ‘Mods in the Marsh’ triumph.

Ringoes, N.J.’s Ryan Godown finished the night in third. The podium finish was good enough to secure the Wegner Automotive ‘Cajun Swing’ Championship worth $750 from a $2,000 total point fund.

The 75-lapper began with Saratoga Springs, N.Y.’s Jack Lehner on the pole position with Robeline, La.’s Greg Dillard alongside.

Sheppard took the green flag from the third spot, wasting no time getting by Dillard and beginning his quest to slide around Lehner for the lead.

After a lap-two yellow, Sheppard restarted alongside Lehner and quickly found the outside groove to his liking. Sheppard raced to the front by the conclusion of the third circuit and began to stretch his advantage.

Sheppard pulled away from the rest of the field, affording him the ability to meticulously dice through lap traffic. Lehner meanwhile was locked in a battle with King Ferry, N.Y.’s Mike Mahaney and Ransomville, N.Y.’s Erick Rudolph for the runner-up spot.

Godown was also on a charge, after pulling 12th in the Beyea Custom Headers Redraw, Godown was on a mission to get to the front, as he slid by Mahaney and Sprakers, N.Y.’s Stewart Friesen to get to fourth.

Sheppard’s large advantage would be annexed by a lap-27 caution for a flat tire on Mike Krompegal’s racecar.

On the restart, Godown’s assault on the field continued, as the ‘Ringoes Rocket’ quickly disposed of Rudolph before another yellow flag flew on lap 29.

Godown used the ensuing restart to drive by Lehner and take the runner-up spot. Friesen also got a great jump on the restart, going from fifth to third and appearing as though he was going to become a factor for the $20,000 victory.

The field settled into its longest green-flag run of the night, allowing Sheppard and Godown to show they were the top-two cars in the field.

While the top-two stretched their advantage over the field, Rudolph worked back to third after fading to sixth on the lap-29 restart.

Up front, Godown was pacing Sheppard’s Hurlock Auto & Speed Supply No. 9s until a stretch of five slower cars allowed Sheppard to flex his muscle on the outside, putting four cars between himself and Godown.

The lead pair eventually both cleared the lapped cars, giving Godown a clean racetrack to try and run Sheppard back down. That is exactly what he did.

By lap 57, Godown was up to Sheppard’s back bumper, as ‘Super Matt’ was no longer able to use the outside groove to pass lap cars effectively.

The pair battled for the next three laps. Godown slipped by Sheppard, who got bottled up behind a lap car on lap 59, but Godown slid wide in the third and fourth corner, allowing Sheppard to drive back by and lead the 60th circuit.

Before the pair could race back into traffic, a caution for a slow car on the backstretch reset the field and gave them a clear racetrack.

Sheppard’s pass of Godown before the yellow proved to be the difference. Despite late-race restarts, Sheppard had the preferred groove on the bottom and controlled the top spot.

Rudolph surpassed Godown to take the runner-up spot in his Revive Spine Center No. 25. Godown’s third-place run capped off the ‘Cajun Swing’ championship for him, pocketing him just under $20,000 for the five days of racing.

Jackson, N.J.’s Steve Davis brought his PA/NJ Spec 358 Small-Block home with an impressive fourth-place finish and Mahaney rounded out the top-five in the George Huttig-owned No. 35 utilizing big-block power.

Friesen ended his night in the sixth position after pitting to replace a right-rear tire late in the event and Lehner wound up with a seventh-place run after leading early on. Vernon, N.Y.’s Willy Decker brought his JSD Express No. 1x home in the eighth spot with Ballston Spa, N.Y.’s Derrick McGrew Jr. running ninth in his family-owned No. 26. Red Oak, Texas resident Jon White Jr. ended the night in 10th as the highest-finishing ‘Cajun Region’ driver.

Twenty-seven cars registered and took the green in the 2021 ‘Mods in the Marsh 75.’

Heat winners, receiving $50 each courtesy of FloRacing in addition to a $50 ERK Steering Repair gift certificate were Sheppard, Davis and Rudolph.

Saturday’s ‘Mods in the Marsh 75’ concluded the 2021 season for the Bob Hilbert Sportswear Short Track Super Series Fueled By Sunoco. Be sure to follow the off-season happenings on the series website or Facebook page.